Member Login
By / Herschell Gordon Lewis / In Best practice /
Rosser Reeves was an advertising titan from a dim and distant past. The late great Herschell Gordon Lewis reveals the timeless lesson all direct marketers should learn from him. (Note: this article is an excerpt from our eBook featuring a collection of Herschell's works.)

Most copywriters don’t know who Rosser Reeves was. Pity.

That this fellow isn’t part of their historical base isn’t surprising. Rosser Reeves died a quarter of a century ago.

That was before the major sophisticating factor, the world wide web, existed as a commercial medium.

Reeves would be 100 years old next year, if he were still alive. So any influence he might have wielded would be obsolete.

Veterans of our ongoing war to force our fair market share of whatever we’re selling, not only remember Rosser Reeves but – if we’re smart enough, astute enough, and savvy enough – apply a principle he codified.

Reeves headed Ted Bates, an advertising agency (long since absorbed into one of those multi- agency conglomerates).

The seminal year for his claim to immortality was 1961, the year in which he published a book titled, ‘Reality in Advertising’.

In that book, he explained a philosophy of dynamic marketing he called USP – the unique selling proposition.

Using this technique, he fathered some timeless advertising campaigns, such as M&M candy (‘Melt in your mouth, not in your hand’) and Pepsodent toothpaste (‘You’ll wonder where the yellow went’).

Eventually, the advertising world concluded that he was playing a one- string fiddle, and his approach fell into disfavour.

It’s time to resuscitate, especially in our vibrant world of direct response which has posted the bans for formalising nuptials with the web.

What USP can offer us

What separates USP from all those other ‘Here’s how to sell’ advisories was and is a double-barrelled philosophy.

The first barrel, one that a majority of advertising agencies resisted then and resist now, was an approach based on the proposition that product claim is a more powerful sales weapon than brand image.

The second barrel refines the first: Find and exploit what most people, exposed to your message, will accept as a benefit unique to your product or service. That concept eliminates the too common ‘fish for it’ approach typified by laundry lists – ‘18 reasons why you should buy now’.

Powerful presentation of a unique selling proposition is where the top- level copywriter and his/her lawful prey, the unaware potential buyer, get married. The buyer is more than a buyer. He or she is an advocate, because response is to a claim competitors might have made but haven’t made.

The reaction to a USP-generated message, properly worded, parallels the reaction to a one-to-one encounter with a merchant who points out to you specific reasons why you should take advantage of the offer.

A complicated approach? No.

Regarded as too basic by too many marketers?

All of us who toil in the direct response creative dungeons can benefit from Rosser Reeves’ explanations of what he meant by benefit.

These are codified in three linked statements that have survived for almost half a century.

“Unless a product becomes outmoded, a great campaign will not wear itself out.”

And the third statement:

“You must make the product interesting, not just make the ad different. And that’s what too many of the copywriters . . . don’t yet understand.”

Here’s my own statement: Go thou and do likewise.

Killer Copy in a Crisis: Download our free eBook featuring the works of Herschell Gordon Lewis. 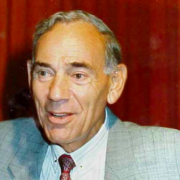