Member Login
Home / Strategy and Management
By / Alex Hill / In Insight /
Did the John Lewis TV ad ‘Moz the Monster’ prompt you to buy from that retailer . . . or do you fast-forward through the ads? Sweet seasonal telly ads leave a bad taste in the modern connected-up world, says Alex Hill – who believes brands busting their budgets on a big Christmas TV ad campaign should instead think audience-first, with social and digital activity leading the marketing, rather than the other way round.

It’s during this time, especially in the UK, when we can take a long look at the 12 months that have passed and ponder on why messages stand out, simply for being Christmas ads.

The festive period seems to have become a moment that forces an ‘all in’ execution that could be a ‘brand determining effort’ for a selection of big businesses.

Is the hype warranted? In a new world of Netflix, social feeds and digital metrics, does TV play a part in shifting business objectives, or are we just doing it because, “that’s what you do at Christmas”?

The tide may – and should – be turning.

2017 was a huge year for digital – it finally made plenty of historic ‘trends for next year’ predictions come true – and outstripped TV in media spend.

According to Magna, (the research brand of IPG Mediabrands), digital reached $209bn worldwide – versus $178bn of TV spend. That’s 41% of the market, compared to 35% – and, if reports and trend forecasts are to be believed, this gap is only going to widen.

Here in the UK, we claim £18.8bn of that total spend. However, a record £6bn of that is projected to have been spent just at Christmas. That’s 30% of total spend, realistically, in a one-month period.

Out of that, £1.2bn is going on TV – that’s 6% of all our ad spend, on CGI’d, cover song-laden ditties that force you to communally agree to love one another. It beats the global average, but it’s still a huge amount of money to pour into an increasingly outdated medium.

The biggest and most experienced offender is undoubtedly John Lewis. It reportedly spent £7m on its ‘Moz the Monster’ TV spot, while investing seven months of time to make it happen.

But are we ‘over’ the Christmas TV ad?

John Lewis’ sweeping and wide-reaching commitment to this time of year is noted, but the internal and industry reports are telling us that more personalised – even private – and online experiences return better results. This is across brand uplift, engagement, market share and sales.

John Lewis’ effort must have returns, as it has stuck to the formula for over a decade now, but initial audience reactions suggest many are ‘over it’ this year. It’s also telling that a £700 Voucher Code lampoon generated as much attention and affection…via a newsfeed.

2017 will surely be remembered as the year when Facebook geared up to be ‘Facebook TV’. It has been the year our feeds were increasingly populated with hundreds, thousands or millions of videos.

As it goes, 500 million (MILLION) people are watching them every day. Your friends, small brands, big businesses and even political parties are all in the game of short form entertainment.

When we consider this activity is expected to account for 80% of all traffic in the next four years, it becomes clear that brands are going to need to keep being part of the journey, and participating at a high level if they want to succeed. TV spots that are naively just split up and distributed here could drown, as they don’t fit the bill of what modern audiences want to see.

Research increasingly shows that young people are consuming more entertainment online over TV, with services such as Netflix, Amazon Prime and YouTube are fast becoming the only choice of a new generation. With preferences and behaviours shifting, TV ad makers need to better understand the ‘why’ behind this change and question whether it’s still a viable strategy.

Even when we discount the ‘yoof’, TV ad makers should worry about whether older and savvier audiences will still be available to them. Smart TVs and On Demand services from the main providers all come with play-now, pause and fast-forward buttons. Why bother with the ads?

All of these services match the needs of the future – convenient, personalised, available. To make matters worse for traditional media, they all come with algorithms that ensure people see more of what they like with minimal fuss. Fingers do not need to go into the air here.

So, what if TV ads embraced this in 2018? It’s time they joined this connected-up world – to continue the story, not interrupt it.

To make it happen, brands need to start thinking audience-first; start thinking bigger. Social and digital activity could – should – be a direct lead on what any TV campaign or spend should be, not the other way around.

We can create amazing content for social and digital, see what audiences like, engage with, share – then distribute it onto the television set, the Amazon Prime ad, the online Channel 4 ad break, or the Smart TV suggested videos.

I’d relish seeing a truly 360, audience-first effort from the likes of John Lewis. By sharing their creative ability in more useful ways to the modern consumer, they could undoubtedly cut-through a lot more, and create a more engaging TV ad come Christmas. A £7m production budget could go a long way in the realm of digital and social… and still leave some room for the Christmas rush.

Here’s hoping we can unwrap new stories this time next year. 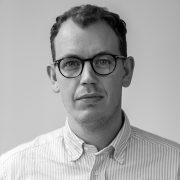