Member Login
Home / Data Driven Channels
By / Paul Twite / In Insight /
Your social media strategy should be carefully tailored, research shows, because different demographics use multiple channels in unique ways – and a brand which uses the same approach across platforms and age groups is unlikely to get good results. Here’s why certain brands should examine their data and hone a Snapchat marketing strategy to target a particular audience.

Snapchat’s USP when it emerged onto the market in September 2011 was the attraction to send images which disappeared. The app has now evolved into a key player on the social media market, adding new features such as ‘my story’ and filters which have been very popular. Brands have been able to secure their own channels and filters to promote content.

Since then, other social media channels have introduced similar features, with Facebook recently rolling out ‘My Day’, which allows users to share an image with contacts or directly for a 24-hour period. Snapchat, meanwhile, has attempted to ensure that when its competitors adopt similar features, it retains its popularity. All this has meant that this year saw Snap, the parent company of the app, go public with the biggest IPO since 2014.

The need for companies to incorporate social media into their outreach to consumers is well understood, both by social channels themselves and by the brands that commit significant resources to producing content for them. Yet, there is a balance to be struck as previously popular social media sites such as Myspace have floundered as new products, services and channels have surfaced.

Equally, different demographics use multiple social media channels in unique ways. A brand which used the same approach across platforms and across age groups is unlikely to see optimum results, and risks the ire of the internet with a social media misstep, this is why a social media strategy needs to be tailored.

A targeted and considered social media marketing strategy is therefore essential and this must be based on a thorough understanding of data as well as a more intuitive creative approach. While brands have often embedded Facebook, Instagram and Twitter into their plans, it is now worth certain brands building Snapchat into this framework. 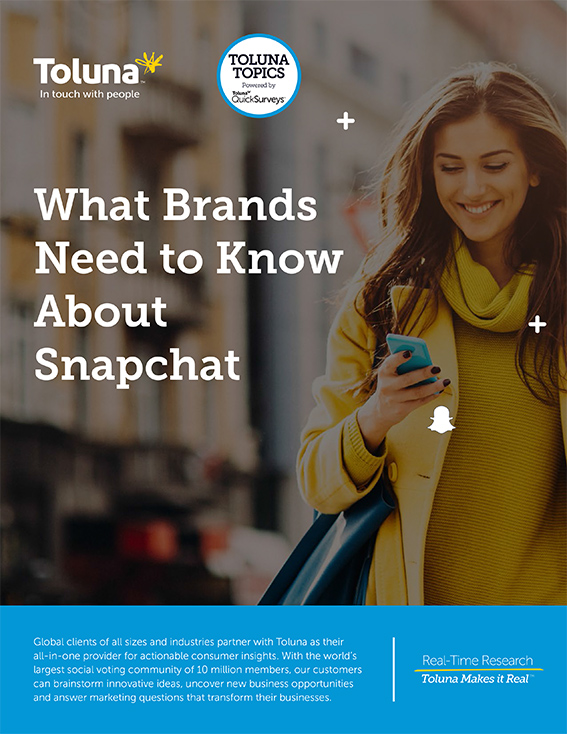 We recently conducted a survey into the attitudes of more than 1,500 consumers in the US and the UK. Data of this type can help companies learn more about how they can leverage the social network to their advantage and reach their target audience most effectively. 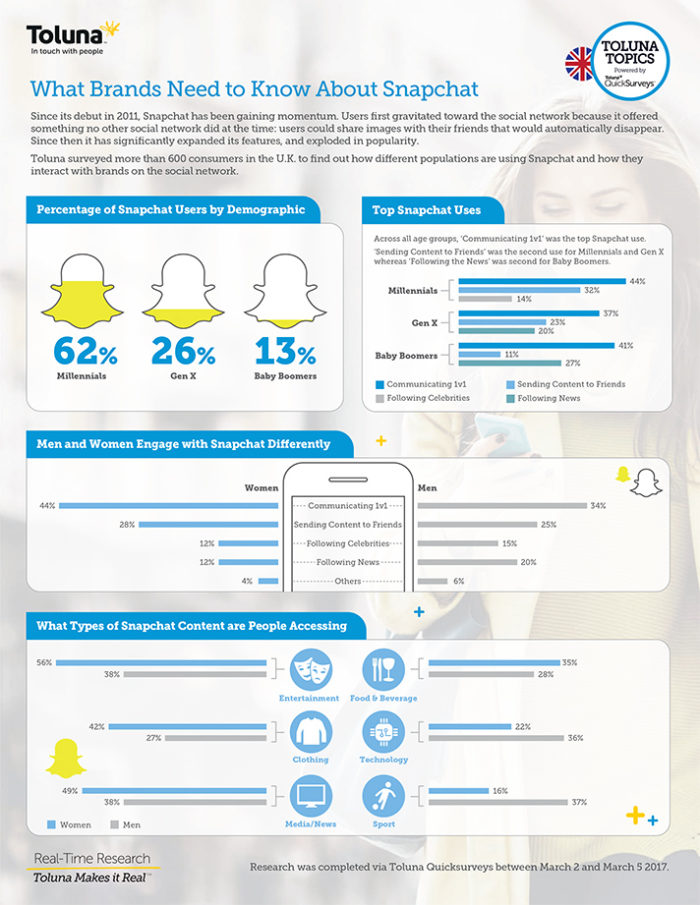 It would appear that men and women have a different approach to Snapchat with women in both the US and the UK being most likely to use the platform as a means of one-on-one communication with close friends (37 per cent in the US and 44 per cent in the UK, respectively).

The type of brands that men and women reported interacting with also varied, with 37 per cent of men in the UK indicating a preference for branded sports content, compared to 16 per cent of women. Men were also more likely to engage with branded technology content (37 per cent) than their female counterparts (22 per cent). Women, on the other hand, reported a preference for entertainment brands (56 per cent) as well as food and beverage brands (35 per cent) – a key insight for any companies wanting to boost sales amongst either gender.

This has implications both for where brands place content and what content they produce for different audiences. A sports company would reach far more men through Snapchat Discover than women and could reasonably expect a better response as a result.

Perhaps unsurprisingly, different age groups use Snapchat in different ways, with UK Millennials being the age group most likely to use the app – 62 per cent reported using Snapchat as compared to 26 per cent of Gen X and 13% of Baby Boomers.

However, some things cross age barriers – every generation grouping said that the temporary nature of the images was their favourite Snapchat feature.

Many brands are adapting to the new world of social media when it comes to reaching their target audience and Snapchat undoubtedly fits into this changing landscape. As a newly listed company, Snapchat will be looking to profit from its significant international appeal – and other companies can partner with the fledgling social media giant to their advantage.

Yet, while Snapchat offers many opportunities, with an estimated 158 million people using the app every day worldwide, it is not the ideal platform for every brand. Beyond the differing attitudes to the app between demographics, the cost of sponsoring a filter is substantial – as is that of a running a dedicated brand channel – and the temporary nature of Snapchat means that content has a very short shelf-life.

The survey found that users in the US were not only more likely to value branded features on Snapchat higher than their UK contemporaries, but were also more likely to be aware of branded content on the app.

By understanding your brand, audience and how consumers interact with brands on Snapchat, there is the potential to meaningfully reach users. A company that can attract Snapchat users to send their filters on to friends or can create compelling stories, can win consumer loyalty in a new and exciting way.

Which social media platform is right for your business?